happy Bandcamp Friday!... I hope you've been finding the recommendations as exciting as I have - today's come from Neil at Electronic Sound - I cannot recommend the magazine enough, and you should definitely subscribe if you have any cash left after supporting all the bands and labels he has recommended (there's a 50 track playlist FULL of stuff you'll probably want to get on Bandcamp!) 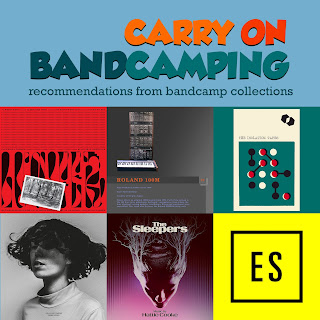 
and here’s a bonus playlist!

Electronic Sound Track Of The Day: A tune a day, for the first 50 days of lockdown, curated by Electronic Sound magazine. Support featured artists via Bandcamp, support independent publishing at electronicsound.co.uk

Black Devil Disco Club
https://www.facebook.com/blackdevildiscoclub/
Bernard Fevre, a French library music composer, released an album in 1978 called ‘Black Devil Disco Club’ which is an absolute corker. Could have been made this year. What he has made this year is an album called ‘Lucifer Is A Flower’, which is ridiculously good fun. Since his rediscovery by Aphex Twin’s Rephlex label, who reissued said ‘Black Devil Disco Club’ in 2004 after finding it at a car boot sale, Bernard has released a bunch of new stuff on Lo Recordings. It’s all good if mutant disco is your thing. He says this is going to be his last BDDC album. Let’s hope not. There’s also really great Creep Show/John Grant remix of ‘Synth Is Not Love’, which is well worth seeking out.

Benge
https://memetune.net/
Ben “Benge” Edwards is the glue that holds so much independent electronic music together these days. He has a wild collection of vintage analogue synths in his studio, a Bond villain house on the edge of Dartmoor, and everyone from John Grant to Blancmange swears by his production skills, for good reason. This track is from the follow-up to his ‘20 Systems’ album where he made 20 tracks using a different vintage synth for each track. Here he tackles the rich history of modular systems in the same way. ‘1979 - Roland 100M’ features, wait for it, the Roland System 100M, as used by The Human League, Vince Clark, Orbital and The BBC Radiophonic Workshop among others. Synth geeks should look up Hans Zimmer’s 100m. It’s a total beast.

The Home Current
https://thehomecurrent-cis.bandcamp.com/
I’ve lost count of the number of albums Luxembourg-based producer/DJ Martin Jensen has released recently. Prolific doesn’t even begin to cut it. Martin does a delicious line in future-retro 90s floorfillers. There’s a bunch of artists making work like this, call it post-rave if you need a label, Lo-Five, Andrew Bunting spring to mind. This is a bit of a double whammy entry as ‘On The Subject Of Appropriate Band Names’ is taken from the brilliant Castles In Space compilation, ‘The Isolation Tapes’, which is a who’s who of the current independent electronic music scene, a C86 of synthy love if you like. The physical version sold out in a blink, but the digital version is very much worth snapping up.

Kelly Lee Owens
https://www.kellyleeowens.com
Delayed from May, and now due out at the end of August, Kelly Lee Owens’ second album, ‘Inner Song’, on the excellent Smalltown Supersound label, is a real step up in class from her 2017 self-titled debut. Good as her debut was, I’ve had this one on heavy rotation and it’s a real showstopper. Favourite track at the moment is ‘On’, where her gentle vocal gives way to a delicious techno wigout, a la Jon Hopkins (who she’s also worked with). It’s one of the best tracks I’ve heard all year. Oh, and the album opens with a cover of Radiohead’s ‘Arpeggi’. Totally nails how a Radiohead cover should be.

Hattie Cooke
https://www.facebook.com/hattiecookemusic/
Hattie Cooke is really interesting. Discovered her last year when she released her ‘Sleepers’ album on the cassette label Spun Out Of Control. Dig around and you discover she’s a Brighton-based singer/songwriter who stumbled quite by accident on the tape soundtrack scene. ‘Sleepers’ is a real stunner, Electronic Sound called it a “an enjoyably dark and woozy musical journey”, which it is. There’s a new track, ‘I Get By’ (on the Castles In Space compilation, see The Home Current entry, above), where she mixes the synths with her singer/songwriter side and very much comes up smelling of roses. Really hope her work continues down this route as she seems to be building quite a head of steam in our world. 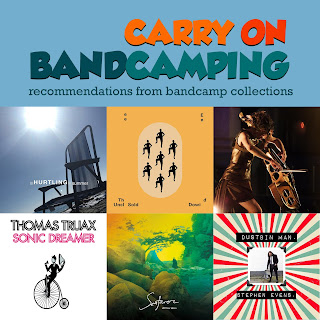 Sometimes I think I'm bored of guitars but then Jen Macro makes them interesting again and I want to mosh and headbang and stick my head inside a speaker.

Ed Dowie's album 'The Uncle Sold' was released a couple of years ago but even now hardly a week goes by when I don't play it. Strange and uplifting.

Hoping that including the live recording of this will give some small sense of how electrifying Jo Quail's live-looping cello performances are. If you don't know her work I urge you to investigate further.

Some have described instrument inventor Thomas Truax as a mad genius. He is not mad. The way he has achieved these sounds is incredible enough, and then he throws in brilliant lyrics like this.

The gorgeous and slightly frightening sound of immense dark spaces, from Norway.

Dustbin Man by Stephen Evens
Written before The Current Situation happened but becoming more relevant by the day. A flawless pop tune that rocks
Posted by wiaiwya at 12:30 AM No comments: 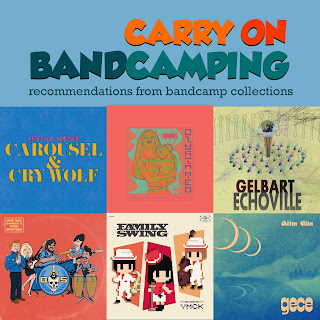 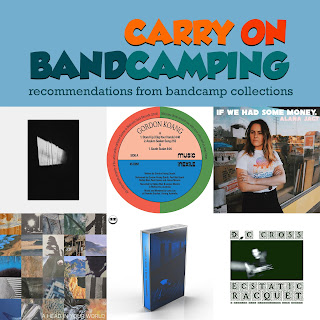 Notes: Musically I fit into an international musical community as much I do a domestic one, but I wanted to share some Australian music I’ve bought on bandcamp.

Lawrence is one of my favourite sound artists and is a never-ending source of inspiration and guidance to me. His new album is really beautiful and more minimal than the last few. Looking forward to hearing and feeling it loud and immersive when concerts are a thing again.

Gordon Koang is a South Sudanese pop star who moved to Australia on a refugee visa a few years back. He writes great songs and is so joyous live. I saw him play on my birthday last year and my face hurt from smiling so much. In great news, Gordon’s now got his permanent residency and his new album is out in a few months.

I work with Alana in my day job, she’s also one of my favourite Australian ‘classic’ songwriters. This is a great chooglin’ song and I’m excited for her debut album when it’s out.

Adam McFillin is a close friend, our musical paths have woven into each other for a decade and a half now. I thought he’d finished up with his Brain Drain project, but I’m gleefully wrong with this new album.

Fia Fiell aka Carolyn Schofield makes absolutely beautiful synth music. Both this and her full-length LP All In The Same Room are absolutely recommended.

I was a massive fan of Darren Cross’ band Gerling when I was in my formative musical years, so his take on solo instrumental guitar was always going to be interesting for me. Absolutely worth checking out his instrumental and vocal solo releases – as well as hitting the wayback machine and delving into his 00s band work. 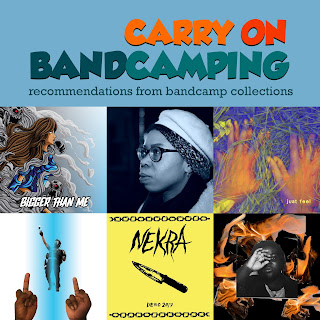 Meet Me @ The Altar - Bigger Than Me
This is a brilliant EP of pure pop punk/emo hits, and it's easy to see why fans think they'd fit in perfectly on a label like Fueled By Ramen. I listen to 'Sane' on the regular.

Steffi - Girlhood
It's a joy to listen to the music Steph's created on her own! This is a cool EP, different to what we've made in Big Joanie, and you can hear the influences of Steph's favourite artists like Throwing Muses. I love 'Nowhere'.

Jessica Ashman - Just Feel
This is a great experimental track created by Jess during lockdown, in the wake of the cruel and unjust murder of George Floyd by law enforcement. All proceeds from it are going to the UK QTIBIPOC Hardship fund.

NNAMDÏ - Black Plight
I bought this on recommendation last Bandcamp Day and I'm really glad I did - again it addresses the racial injustice thrust into the spotlight after George Floyd, set to a soundtrack of jagged guitar lines, heavy, cathartic drumming, and lyrics that expose the harsh truths of America in 2020.

Nekra - Demo 2017
This is still one of my favourites in my collection and I will continue to add it to lists until the next Nekra release. It's a short dose of thrilling hardcore from an awesome band.

No Home - Fucking Hell
Okay I don't actually own this yet because I'm waiting for Bandcamp day to buy it! I do have all of No Home's previous releases though. This album really expands upon their penchant for genre-defying, hypnotic music making - and it's awesome to hear additional synths and electronic sounds morphing tracks from my familiar expectations, having heard some of them live. At the moment 'A B- In This Economy' is my fave but that might change as I spend more time with this brilliant record! 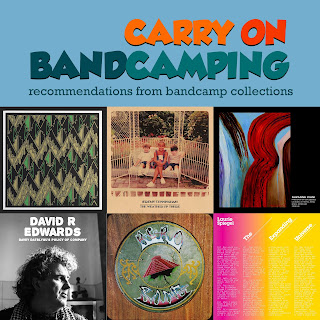 
and something for the weekend:

Harriet Doveton from the Tuts 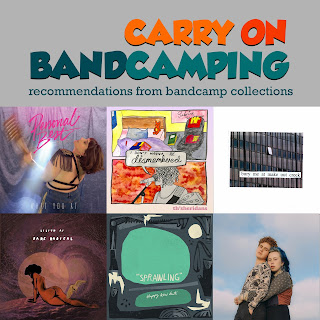 Personal Best- What You At
- Classic Rock for Tragic Lesbians. I never get bored of this album.

Th'Sheridans - I Don't Wanna Be Dismembered
- Gorgeous melodic 'radical softness as a response to everyday racism and misogyny'. Love the way Adam uses his voice in this track.

Mitski- Bury me at makeout creek
- This album makes me feel too much and I love every lyric.

Lilith Ai- Bare Radical
- Opening track Warrior Queen is an anthem. And Lilith does all her own artwork too!

Girlpool  - What chaos is imaginary
- Their latest album, infectious melodies and beautiful sounds. I love how their voices work together.
Posted by wiaiwya at 12:30 AM No comments: